Two weeks before I closed on my apartment last year, I went running with my friend Monica. Well, maybe she was running and I was walking around trying to look productive. After our run, she told me excitedly, “I found you a cat.” She had known that I was debating whether to get a furry friend once I moved in to my new place and had already found me one. “He’s a rescue,” she explained, “Look at his toes.” Curiously, I looked at the ad she showed me from her neighborhood news letter and fell in love. He had all the criteria I had wanted in a cat, adult and only cat child needs, plus adorable thumbs from a polydactyl gene. Polydactyl cats are lovingly referred to as Hemingway cats since he collected them and I was ready to take my new friend home.

I didn’t know that the couple I had adopted him from fostered cats regularly and I not only had to have a phone interview but an in person one as well to see how the cat reacted to me and my boyfriend. My boyfriend H, doesn’t even live with me or live by me for that matter, but they needed to make sure we were good people, which I admired. He had been named Harrison by his foster parents, which bummed me out because I had wanted to name him Hemingway and felt he was probably already used to his name since they had had him for a few months. H joked that I could call him Harrison George, a swap of my favorite Beatles name, and it was sealed.

After bringing him home, I realized what had been missing in my life in my new furry friend. I was so fortunate that I ended up with such a good cat. He has only broken two things ( oops!), has never clawed any furniture or had an accident. He eats dry food, goes in his liter box and lounges in bed watching Netflix when I need him too. We have rituals and I am THAT person on Facebook who posts tons of cat photos. I was even going to to write a post on how frugal a pet he was until it happened. What happened? 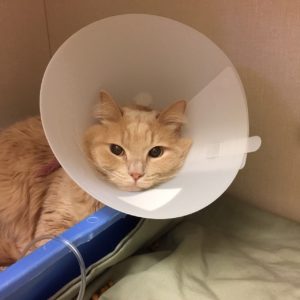 It had started out innocently enough, I suppose. I came home from work after a long day back after a three day weekend. Harrison, who usually greets me at the door sauntered in and looked at me expectantly glanced nervously around the room. I picked him and walked over to the couch to cuddle with him only to be hit in the face by the stench of cat vomit on my new rug. I looked at him then looked at the rug and cooed at him for being sick. Poor thing, I thought. Maybe he meant to choke up a hair ball. But then, I noticed more vomit around the room. and less than 15 minutes later, he threw up again. What was going on?

After calling the vet, I packed him up in his kitty crate and whisked him off to the vet. Throwing up was completely new to us and it made have a sick feeling in my gut. After spending what seemed like forever at the vet, I noticed he was getting worse. He seemed in pain and couldn’t get comfortable. He had stopped throwing up but it was replaced with him smacking his lips, a sign that shows dehydration in felines. After signing off on $300 worth of tests, he was diagnosed with gastroenteritis and a swollen bladder. Since swollen bladders in felines is serious, I left him there to be observed over night with a vet. I felt they could keep a better eye on the bladder issue than I could sleeping so I went home without him but feeling overly optimistic.

It didn’t last long though. The next day while getting ready for a meeting, I called to check on him and found out that he actually had come down with a severe fever. I didn’t even know cats could get fevers but here he was, with a severe fever, swollen bladder and refusing to eat or drink anything. After my meeting I opted to work home for the rest of the day and spent my breaks checking on him until the vet could provide me with some answers. An IV drop was set up in his cage and just like a little human, he had tape running around his wrist to keep the needle in. He seemed medicated out of his mind on pain pills and an anti-inflammatory and still hadn’t eaten or used the rest room yet. He was also sitting on ice packs to help bring the temperature down.

Before I went to bed, I had called again to check on him and heard good news. He was using the restroom! And not only that but his fever had broken. I could definitely take him home the next day. Feeling relieved, I fell asleep. I was already a basket because he wasn’t home but hearing he could come home the next day helped me relax. It changed though. I received a phone call in the morning telling me he had went back to a fever again and was getting more fluids. He obviously had an infection somewhere in his colon but they couldn’t figure out why he was so sick since he was an indoor cat and why his immune system wasn’t responding. Still positive, I went to a work retreat and agreed to additional testing to help him, even though the financial costs was now rising.

During my lunch break, I heard bad news. Harrison, although testing negative at the time of adoption from his foster parents, had tested positive for Feline Immunodeficiency Virus or FIV. Yes, it’s the cat version of HIV. And yes, he was having a severe flare up which left his immune system struggling. After crying and getting through a rough day at work unrelated to my cat, I rushed to the vet who had started him on a strong antibiotic and more fluids. He was given a appetite stimulant, new medicines for his immune system, vitamins and an antibiotic. FIV is no longer a death sentence for cats, just like it once was for humans. I never realized how similar immune systems were except cats spread the disease through biting during cat fights or mating.

Although I am bummed Harrison might have a shorter life because of his disease, I am happy that I had an emergency fund to help him get the treatment he needed and deserved. He is everything to me and I sincerely look forward to going home to him everyday. Almost losing him also reminded me that I am not alone, I actually have a furry friend that thinks the world of me 24/7. This situation has also inspired me to save even more in my emergency fund since my cat wiped it out in two days. I’ve always maintained a $1,000 but I think pet ownership requires an even bigger one. My new goal is going to be bookmarked for $3,000 which aligns with what I had envisioned earlier in the year before life happened.

So, if you want companionship, a roommate with attitude and an occasional snuggle, cat ownership may be right for you. But only if you are willing to wipe our your emergency fund.

Any pet emergencies break your efund?