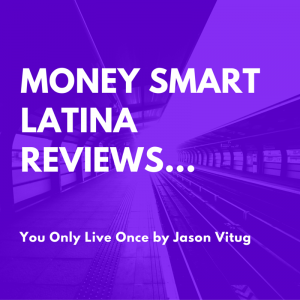 I met Jason Vitug a few years ago during FinCon13. Actually, another blogger had mentioned that he would be there and I was friends with her so she mentioned to both of us we should connect. We happened to bump into each other on the dance floor of a party I was throwing.

At FinCon, people don’t really discuss their dance skills but rather their projects, passions and purpose. Jason was filled with all of the above and since meeting him all those years ago, I’ve had the pleasure of getting to know him along with working on projects with him. I’ve spent time staff writing for him as well as meeting up with him on his famous grassroots mission, The Road To Financial Wellness. One of Jason’s passions is to make talk of finances less taboo and really get dialogue started to help you think about the life you want to live.

Jason recently released a book after coming off his award winning collaboration on the road and before going out for his second tour, You Only Live Once. He’s taken the YOLO acronym millennials are so fond of using and instead of using to make it rain at Starbucks, he’s implied it in a purposeful way to help you think about creating the life you want. And maybe I’m the one who makes it rain at Starbucks but I digress.

You Only Live Once is different from the usual finance book in the way that it actually can be broken up into a self help book as well. I know some people groan at the word self help but I find that since becoming a self help groupie a few years ago, my mindset on life and what I can accomplish has changed. Sure, I was taking care of my finances but I’d always find myself back at square one with just about everything and that’s because my mindset never changed.

Mindset is a big part of keeping your finances on the right course and aiding in your road trip to a purposeful life, which is discussed in this book. It doesn’t necessarily tell you about The Secret or staying positive, but it discusses personal core values. Quite easily, people are able to say certain things matter but don’t spend time or invest in it financially. If you don’t invest time or money into something, like a goal of traveling, it’s easy to get caught up in just talk and not action.

Along with speaking of our core values, it also discusses the notion of time. What do we really spend our time on? Is it something mindless like TV watching or FB scrolling or is it something making our lives more productive, such as reading a book or spending time with a loved one? Both things that people say they value but don’t necessarily make time for, then get upset they aren’t living a life of purpose.

When making the choice to go back to school as an adult working full-time, I convinced my roommate to actively cut our cable. I had found myself wasting hours on consumption on the TV in the living room set and knew I needed to limit as many distractions as possible in preparation of getting an education. To this day, I pride myself on not watching TV. I watch four shows and refuse to get sucked into any new ones. I own a TV but I usually forget I have it since it was a gift from my dad when I got my own apartment. As a matter of fact, it collected dust in my living room for three months before I hooked it up and then it was another month before I watched an episode of AHS on it.

Jason’s book is filled with real life examples and stories like the one I provided above as well as financial advice for beginners. Along with the great credit avalanche/ snowball debate, he also talks about budgeting, investing and spending on your core values. After making a list of my values, which I’ll be sharing next week, I realized some of my spending aligns but not all. With a recent promotion and my birthday within a month, it was a great time to sit back and think about the upcoming year.

I highly reconnect You Only Live Once and I can’t wait to see what else Jason has in store!

Preparation Is My Financial Empowerment