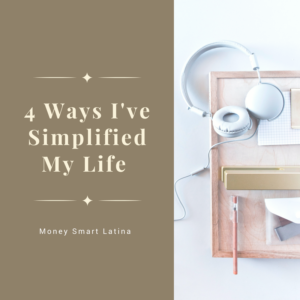 When I was growing up, my favorite band, besides The Beatles was Weezer. I was obsessed with the lead singer Rivers Cuomo and devoured everything I could find about him on the Internet. It was stated in the late 90’s he gave away a lot of his possessions and zoned out in an apartment by himself with the bare minimum he needed to get by. Since my family was full of people who loved their stuff, I couldn’t imagine doing that and it haunted me.

Now that I am at least twice the age I was when first reading that article, I can say that I am aware I have a love/hate relationship with stuff, mainly my own. Moving four times in less than two years will do that to a person. While I think decluttering your life is an ongoing practice, I have made some strides to simplify my life. I’m not perfect by any means, and nowhere near a minimalist like some, but I’ll take these small wins when I can get them.

I Donated Half Of My Closet

Last spring, I had a series of misfortunate events, which really weighed on me. I felt I couldn’t catch a break and was convinced I had bad luck. One of the things that happened to me was that I had to pack up my entire apartment in plastic trash bags so it could be exterminated, due to no fault of my own. I slowly started unpacking everything once it was safe but realized two months later I still had tons and tons of clothes in trash bags on my bedroom floor. Oops.

It took a week but I ended up donating half of my closet. I had a lot of clothes I wasn’t wearing and were just taking up space, both physically and mentally. Now I can get ready easier, I know where everything is when I need it and I have less laundry to do. I can still go weeks without doing laundry so I still have some curating to do but all in due time.

I Don’t Keep Up With The Joneses

When I was twenty-one years old, I had the bright idea to move to Las Vegas. My small town life wasn’t cutting it anymore and so I called my ex-fiancee to come pick me up. I didn’t have a job or a car, I was a real hot mess. I found a job working at Macy’s doing makeup on call for a few months until I found something more permanent but it was too late. While I was at Macy’s, I fell into a real trap of wanting nice things, specifically name brands. I fantasized about being one of my customers and spending until my heart’s content.

I had everything at my fingertips and rarely did I have the money for it. But do you think that stopped me? No. I bought designer purses when I could along with sunglasses and jewelry because it made me feel better about myself instead of addressing my real issues. My ex-bought me the same crap and obviously, we didn’t live happily ever after.

Now, I rarely spend money on that kind of stuff or anything else new or fancy. I’ve had the same car since 2011 when I bought it off my friend’s grandparents. When I purchased an iPhone last year so I could run my business from anywhere, I made sure to not buy the newest model and instead, what would work for the next few years for my needs. I didn’t need an iPhone per say, but I enjoy having a smartphone with a reliable network since I travel so much. You can buy quality items to last, it’s just a waste when you constantly feel the need to replace them.

I Mainstreamed My Beauty Routine

Gone are the days of $125 cut and colors. Yes, I did spend this much on my hair when I was younger and no, that wasn’t including the tip. My hair was three colors for the longest time and in order to get it to be two of those, I had to bleach the crap out of it. I was also obsessed with beauty products from Sephora, anything I thought would make me prettier. Do you see a theme here? Boy, was I insecure.

Now, I wear my hair long and get it cut twice a year. I went back to my natural hair color almost five years ago and don’t see myself going back. I also no longer wear makeup on a regular basis and instead, just wear it on special occasions, both professionally and personally. While I’m still not as confident as I would like to be, I know I do not need to layer this stuff on in order to feel better about myself.  I love taking care of my skin and don’t skimp but I also no longer need an hour in the bathroom.

When I was twenty-three, I began meal planning. The frugal bug had bitten me and I decided groceries were the easiest thing I could cut back on at that time. Meal planning saved me money, taught me to be resourceful and l learned how to actually cook. Years later, I still meal plan as a way to save extra costs and time.

Every Sunday morning, I scan my Pinterest app to see what I feel like making for the week. After checking my kitchen for supplies, I make a list and head to one of three different stores, depending on what my needs are for the week. Sometimes, I prefer shopping at Target while at other times, a different store. When I get home, I make sure I prep my snacks and cook a big batch of meals to get me started. It helps ensure I eat healthy as well as save time and money. The more prepared I am, the less likely I’ll stop for take out on the way home!

These are just some of the ways I’ve simplified my life as well. When you don’t spend money or energy on things that don’t make you happy or you don’t need, you start to find that you have more of it for things you enjoy and bring your life value.

What are some ways you’ve simplified?

Tips To Declutter In The New Year